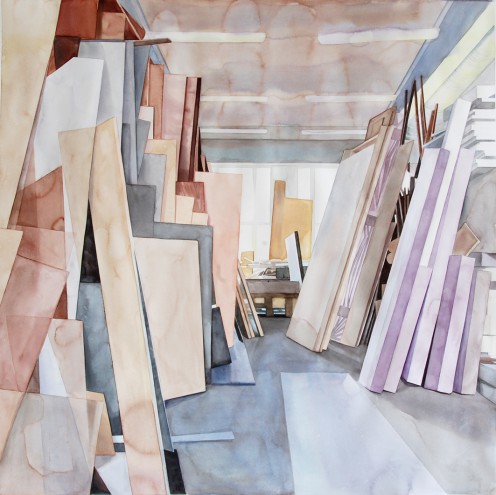 Punctuated Spectra [in Parallel]
For this exhibition Maria Nordin has been invited to give some of my paintings direction. Her colour instructions as well as my samples are painted in large scale. This principle of doubeling is also present in the watercolour installation. A corridor consisting of watercolour paintings  is presented. The vanishing point of each painting is perforated, and the central perspective of the opposite painting is seen through the small peephole. Outside the corridor a double perspective is possible. Inside the corridor the viewer is surrounded by the defining space of single perspectives.

Bio
Kristina Bength's projects most often begin with the meaning that photography has and has had in society, how photography creates identities and plays a role in the construction of institutions. She tries to unfold the archive in spatial installations that makes stories visible. In recent years Kristina Bength has painted from literature rather than photography. She has investigated memories of rooms from literature also as editor and curator in collaboration with artist Cecilia Darle.

Kristina Bength (b. 1984) lives and works in Stockholm, Sweden. She is educated at Gerlesborgsskolan in Bohuslän and at Valand School of Fine Art in Gothenburg (BFA).
Kristina Bength have had solo shows at Galleri Flach in Stockholm, LM D galerie in Paris, Ahlbergshallen in Östersund, Ebelingmuseet in Eskilstuna, Kiruna Stadshus and Trollhättan Konsthall. She has participated in group shows at Uppsala Art Museum, Gävle Konstcentrum, and hangmenProjects in Stockholm, and participated in art fairs such as Volta 5 in Basel, Volta 13 in New York and Le Salon du Dessin Contemporain in Paris.
She has received Project Grant, One- and Two-year Work Grant from the Swedish Arts Grants Committee, the County Council of Dalarna Culture Grant, Kiruna Artist Grant, Byggnads Culture Grant, Axel Theofron Sandberg's Watercolour Grant from The Royal Swedish Academy of Fine Arts and Marianne & Sigvard Bernadotte's Art Fund Grant 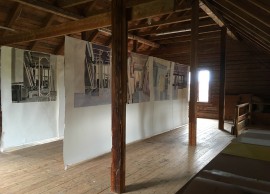 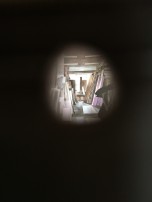